With Upper & Lower Y-axis Turret Added, High-performance Multifunctional Horizontal Turning Center
Doosan Machine Tools has expanded its lineup of the PUMA TT series, a high-performance process-intensive turning center that can automate all the workpiece input and output processes on one machine tool. The PUMA TT2100SYY/ TT2100SYYB/1300SYY/1300SYYB are high-capacity horizontal turning centers with the chuck size of 5/6/8/10 inches, respectively, equipped with bidirectional spindles and upper and lower turrets. They boast outstanding productivity as the first and second spindles can produce workpieces independently and the workpieces produced by each spindle can be discharged through an automated device. Actually, in a machining productivity test, the productivity of the PUMA TT2100SYY equipped with a Y-axis applied to the upper and lower turrets, was up 20% compared to that of existing models.

Outstanding Machining Quality
Through the application of roller type LM guides to all its axes, the series has realized high-speed high-precision structure that enables customers to maximize their productivity while minimizing thermal deformation through an optimized ball screw design to prevent thermal deformation. Most notably, through the application of Doosan Machine Tools’ technology and know-how, the belt spindle of the PUMA TT series has secured the performance accuracy of the C-axis at the equivalent or higher level than that of a built-in spindle while securing high-torque specifications. Equipped with the same specifications and feed shafts, left and right spindles can divide cutting loads precisely at the ratio of 50:50, which ensures that the series can maximize its productivity. In addition, the turret, the pride of Doosan Machine Tools, equipped with a high-speed, high-rigidity servo motor, guarantees high productivity through precise tool replacement while doubling productivity through the simultaneous operation of upper and lower turrets.

Development of Part Cather and Part unloader for the PUMA TT Series
The parts catcher and the parts unloader, the core automation devices of the PUMA TT series, have improved remarkably in terms of rigidity and speed. The parts catcher that receives remnants or parts from left spindle has been improved structurally so that its operations cannot be disturbed by the lower turret in addition to the enhancement of its rigidity. The parts unloader that receives completed workpieces from right spindle has been upgraded in its operational methods and specifications so that it can operate 33% faster than previous devices.

Improvements in User Convenience
Equipped with a new ergonomic operation panel, the series has a screen developed by the company to facilitate an easy access to Doosan Easy Operation Package. The new panel also features a screen where operators can conveniently set or modify One Shot Cycle enabling one-stop operation of frequently used programs such as parts feed and parts unloader. Through the application of an eco-friendly grease lubrication system instead of the existing oil-based lubrication system, the series has reduced the lubricant replacement cycle to one or twice a year, which enables customers to reduce maintenance costs significantly while keeping their working environment clean. 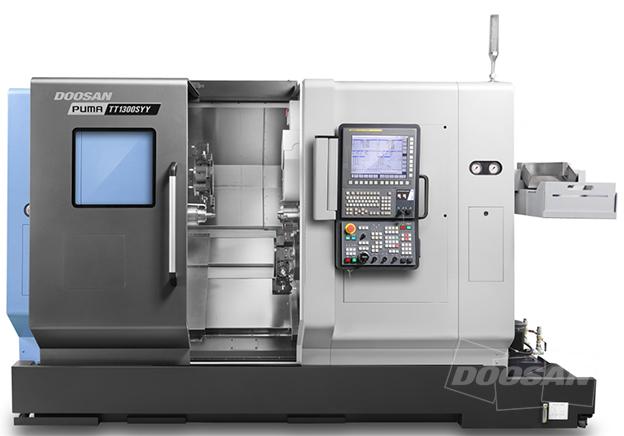